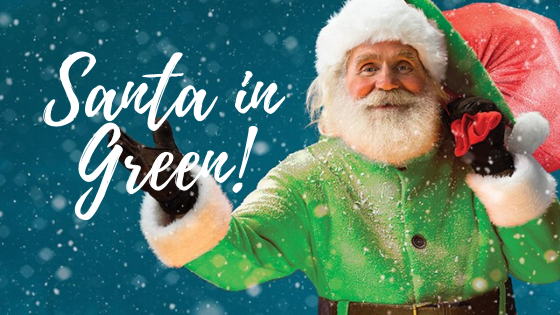 Did Santa Claus Use to be Green?

Santa and green color? How does it even relate?

Traditionally, Santa is synonymous with red and white colors. He is also associated with rich and luxuriant shades of brown in relation to his sleigh and its upholstery.

He is dressed in that iconic red suit with a fur lining. Who can miss the massive black buckled belt matched with black boots?

If you live in the United States or the UK, it can be impossible to imagine Santa wearing anything else.

So, where does the theory of Santa and green color even come from?

Did Santa ever wear a green suit?

The earliest record of Santa’s suit appears to be indeed green. Sometimes he is also depicted as wearing a tan suit.

This was widely attributed to the work of a German-American caricaturist, Thomas Nast.

His first cartoon illustration of Santa appeared in 1863 in Harper’s Weekly, under the heading, “A Christmas Furlough.”

It made the front pages of the paper, but unfortunately, the color of Santa’s suit cannot be seen as it was published in black and white.

But just one year later, in 1864, Santa was depicted delivering toys in a yellow suit! The illustration accompanied the now-famous poem, A Visit from St. Nicholas.

Throughout a couple of years, Santa suit underwent a number of paint jobs, which included tan, green, yellow, and even blue.

When did Santa put on his red suit?

When you see Santa these days with a red suit, it looks so natural. It is hard to think that his suit underwent so many transformations.

It was only in 1868 that Thomas Nast gave Santa his iconic red color. It was an illustration of Santa Claus Sugar Plums.

But even then, only his jacket was red. The rest of his outfit was a hodgepodge of a green hat and white pajamas.

When the holidays of 1881 came, it was the year that Santa was garbed in all his finery.

Thomas Nast’s illustration was everything that made up the modern Santa – rotund physique, jolly appearance, bearded, and rosy cheeks.

And of course, a red suit with fur trimmings.

Santa and his green suit

Although Nast’s illustration was the perfect depiction of Santa as we know him today, there were instances where his suit was shown in green.

Two of the most notable ones that made people question the color of Santa’s suit are:

The explanation behind his green cloak and wreath was that he heralded the arrival of spring in the subsequent months after the holidays.

This is also the reason why Father Christmas was also known as Father Time, King Frost, and King Winter during different times in the 5th and 6th centuries.

The only similarity between Santa Claus and Christmas in terms of appearance is that they both sport a white beard.

But for many cultures and traditions around the world, Father Christmas and Santa Claus are viewed as one and the same person.

In the past centuries, perhaps Father Christmas and Santa Claus were two different persons.

However, since the beginning of the 20th century, they are considered the same person. In fact, Father Christmas is just another name for Santa Claus, especially in Britain.

These are the reason why many people question if Santa used to be green.

Whether Santa and Father Christmas are two different persons or the same, they are both associated with gift-giving and generosity.