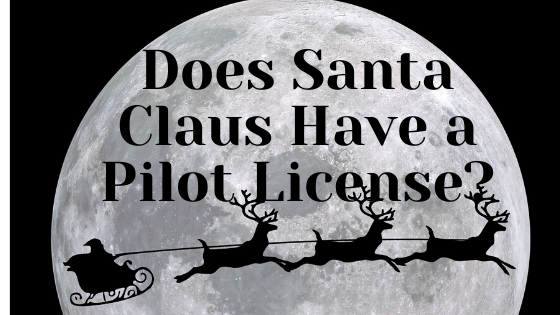 Does Santa Claus Have a Pilot License?

Santa Claus is perhaps the world’s most traveled pilot. He is also the most skilled pilot in the universe. He has the technology as well as the expertise to make a round trip over the globe in 24 hours.

Can any pilot in the world claim to do that? None!

But considering the fact that he flies so often, does he even have a license to fly? Apart from their years of training, it is an illegal activity for a pilot to fly without their license. In fact, it is one of the most critical steps to complete so that you can fly an aircraft in the air.

But since no one knows the personal details about this jolly bearded man and his flying antics, it is a concern to ask whether Santa has a pilot’s license.

If you are dying to know the answer to this question, come along with me in this quest and find out yourself!

When did Santa start flying?

According to credible sources, Santa has been flying as early as 1821. This means that he has been in the business for about 200 years! This is evident from an illustration that accompanied the poem, Old Santeclaus with Much Delight.

Back then, Santa piloted just a single reindeer. The population of the world was not as numerous as it was today, so a solo reindeer was quite enough to carry the gifts. The air traffic was also not crowded as it is today.

As the population of children steadily increased, Santa kept adding reindeers to his sleigh bringing up the total number to nine.

But the pressing question remains – Does he have a license to fly? Well, it looks like Santa has a pilot’s license. But he did not receive the license till the 1900s.

Does it mean Santa was flying without a pilot’s license before that?

But before you jump to the conclusion and accuse Santa of flying illegally, you have to understand the situation.

Back in the 1900s, the world’s population was very minimal. This means that there was minimal to no traffic in the air. In fact, the first powered aircraft was invented in 1903 by the Wright Brothers. However, the first commercial flight took to the air only in 1914.

So, Santa could quickly fly around the world without endangering anybody. He was also flying mostly at night, so it was safe to fly in the air without a certification.

Another reason why Santa did not have a license was that; the requirement for applying for a pilot’s license was not required. Only after the invention of the aircraft was, it was made mandatory for pilots to be certified. The first-ever pilot’s certifications were handed out in 1910.

When did Santa receive his pilot license?

Towards the middle of the 1900s, the world’s population exploded. It also coincided with the law that you need a pilot’s license to fly an aircraft in the air.

Since Santa is someone who cares about the wellbeing and safety of others, he is not about to endanger anyone. So he applied for a license to operate in the airspace.

According to resources available with the Library of Congress, Santa officially received his pilot’s license in 1927. The exact dates remain a mystery, but it was around November or December that he received the license from the Assistant Secretary of Commerce for Aeronautics.

Check out the photograph of Santa receiving his pilot’s license here.

Has Santa renewed his pilot’s license?

A typical pilot’s license has a validity of 12 months. Since Santa received his license quite a long time ago, you might ask whether he has renewed his license.

The answer is yes.

Santa regularly renews his pilot’s license. He does it every year before the holiday season, so he is ready and prepared when the holidays come. Most times, he does this without stirring the attention of the public.

But on some occasions, he can be seen receiving his renewed license from the transport minister in Canada.

Check out the video of Santa receiving the renewed license here.