No holiday season is ever complete without the jolly Ho Ho Ho laughter from Santa Claus. The bearded and red-suited jolly Father Christmas is as ubiquitous as the Christmas tree itself.

Whether it is watching Kris Kringle and Scott Calvin enacting Santa on TV or you run into a Santa on the street, the air is filled with the jingles of bells and Ho Ho Ho. In most parts of the world, children associate this iconic phrase with gifts and presents. Even adults can’t help but feel the joys of the holidays spreading whenever they hear this jolly phrase. 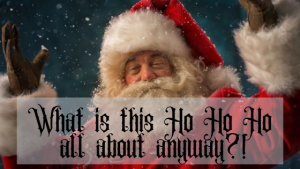 But how many of us really know the meaning of Santa’s greeting and why he says Ho Ho Ho? A lot of us don’t. We are so caught up with the traditions and the commercial aspect of the holiday season that we fail to take time to understand the real meaning of Santa and his greeting.

Well, from this year on, you can break the tradition. Get to know the meaning and the history of Santa’s jolly greeting with us in this post.

Since Santa is a person with a generous belly, it is only fitting that the laughter he produces is a deep chuckling sound that results in Ho Ho Ho!

Ho Ho Ho is also a phrase that is synonymous with old age and warmth of character. Santa is a senior person who portrays and brings love to all the children and therefore is the perfect epitome of warmth and old age. Ho Ho Ho fits his personality perfectly.

In Canada, Ho Ho Ho is also the postal code used by the Canada Post for the many letters that are addressed to Santa. Although it is spelled a little differently, i.e. HOH OHO, it is still derived from the iconic persona of Santa and his laughter. More than a million letters are addressed to Santa every year from all over the world.

Ho Ho Ho is also a way that Santa greets the young children during the holiday season, especially on the 24th of December. But did you know that Santa will only greet you if you have been on your best behavior throughout the year?

Why does Santa laugh when he says Ho Ho Ho?

Santa is a figure with a round belly, and he laughs heartily. So when he laughs, it results in a deep chuckle coming from his belly. The Ho Ho Ho is not merely Santa’s way of chuckling while bringing gifts to children; it is also his way of greeting those he meets on his journeys at Christmas.

Generally, no one associates gifts with a gloomy and sad person. Everyone smiles and laughs when they give gifts as well as when they receive it. There is also a big difference between laughter that is forced and one which is unprovoked. Since Santa is also known as the jolly old elf and he comes bearing gifts, it is only right that laughs Ho Ho Ho very heartily and spontaneously.

Is Ho Ho Ho an onomatopoeia?

If you are unfamiliar with the word onomatopoeia, it is a term that is used to describe words that are formed due to the similarity of the sound they make.

Examples of onomatopoeia are sizzle, cuckoo and Ho Ho Ho, among many others.

What is the history and origin of Ho Ho Ho?

In this poem, St. Nicholas comes riding in a sleigh that is air-borne and is driven by reindeers. The father of the family witnesses St. Nicholas coming down the chimney with a sack of toys. This night visitor quickly fills the stockings on the mantle with the toys as we kept laughing to himself. 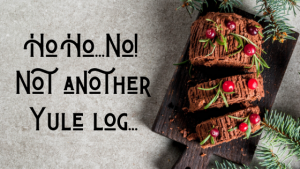 It also described the twinkling eyes, the merry dimples, and his cherry nose. It also described him as a chubby and plump jolly elf with a round belly that shook with his deep laughter. All of these features describe the quintessential Santa as we know him today.

As he flies away in his reindeer driven sleigh, he wishes a Happy Christmas to all.

Since this poem become popular, it has also had a lot of impact on the traditions of gift-giving at Christmas, particularly in American households.

And of course, the deep chuckle that is associated with this jolly old elf remains after many decades since the poem was first published.

Santa is a man of few words. But his iconic Ho Ho Ho is a phrase that everyone recognizes and understands, irrespective of our religious denominations. It is full of warmth, joy and unbridled happiness that we associate with the holiday season, particularly Christmas.

Santa may bring gifts of all kinds, but when we lack love in our hearts, it defeats the real meaning of Christmas. So just as this jolly old elf bring laughter and happiness with his laugher and gifts, may we bring a dash of joy and warmth to everyone around us during the holiday season.

Ho Ho Ho and Merry Christmas to You!