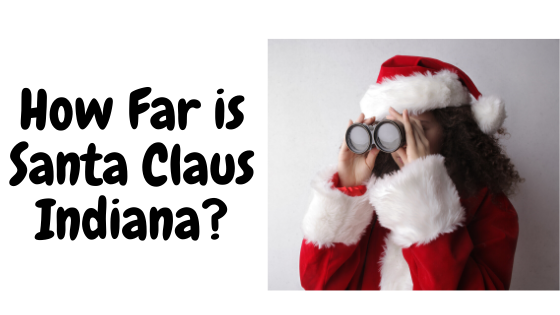 How Far is Santa Claus Indiana

Santa Claus, Indiana, is one of the unique towns in the United States. It is a small town in Spencer Town named after Kris Kringle. It is also one of the very few towns in the World that has an eponymous name after the most iconic Christmas figure.

The town has a population of 2,481 people, according to a 2010 census. By many standards, it is a small town. But it is the largest community in Spencer County.

The town’s post office of the same name receives thousands of letters from children all over the world, especially during Christmas. Volunteers, who are also called Santa’s elves, reply to every letter sent from the children. The tradition of responding to the children’s letter has been practiced since 1914.

Find out how far this is this fantastic city from the Capital cities of the bordering states in this post.

The town of Santa Claus was initially known as Santa Fe. However, when the town officials wanted to establish a name for the post office in 1856, the postal department rejected their application. It was because there was already a post office that had the same name.

This necessitated several town meetings. After a lot of deliberation, the officials of the town decided to change the name of the town to Santa Claus.

The town is a tourist magnet due to its name and also the numerous attractions. According to Forbes magazine, it was one of the World’s top Christmas destinations in 2011. Some of the most notable ones include Santa’s Sandy Castle, Christmas Lake Golf Course, and Santa Claus Museum. The popularity of the town’s name was so famous it was featured in Ripley’s Believe It or Not!

The precise location of the town of Santa Claus is 38°07′08″N 86°55′17″W. It is situated in the southwestern part of the state of Indiana. The town sits between the Ohio River and Interstate 64, which connects many metropolitan areas across four states. It is also one of the longest interstate highways in the United States.

The bordering states of Indiana are:

The distances between the capitals of the four states from Santa Claus are:

A non-stop drive between the two places can be about 4 hours 4 minutes to 48 minutes, depending on your route.

How to get to Santa Claus

There are multiple ways you can visit Santa Claus. The most preferred way is by car. But you can also get to the town by bus or a taxi as well. There are no direct flights to Santa Claus. But you can catch a flight to nearby airports, including Louisville International Airport and Evansville Regional Airport and then catch a one hour ride to the town.