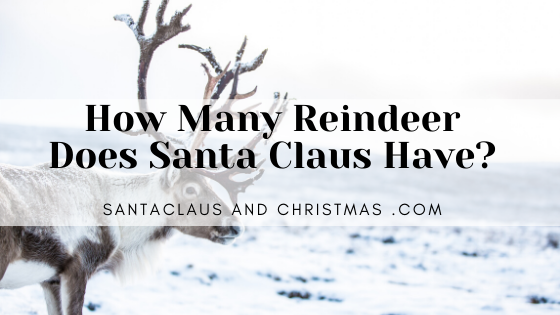 How Many Reindeer did Santa Claus Have?

Santa flies through the sky to deliver toys all over the world every Christmas. But it would not be possible without his sleigh.

This sleigh is perhaps the most magical vehicle in the universe.

This sleigh is driven by reindeer. These are not ordinary reindeer because normal ones don’t have the powers to fly, let alone pull a sleigh with Santa in tow!

But since Santa carries a large number of toys, just how many reindeer does it take to power this extraordinary mode of transport?

You will find out the answer to this question in this post.

The number of Santa’s reindeer

There is a slight debacle as to the exact number of Santa’s reindeer. Some are of the opinion that Santa has eight reindeer, while others say they are nine reindeer that pull the Christmas sleigh.

I believe that Santa did not have so many reindeer in the beginning. In fact, he might have just started his gift-giving business with a solo reindeer.

But the number of reindeer kept growing as it became necessary to pull a more massive sleigh.

So what is the story behind this fascinating vehicle? Let’s dig deeper.

Santa and his reindeer

The earliest record of Santa shows that he had just one reindeer to fly around the globe. This was revealed in the poem Old Santeclaus with Much Delight in the year 1821.

The possibility of Santa flying with a single reindeer, in the beginning, is justified. Back then, there were very fewer children to give the gifts to.

Additionally, there was no air traffic as the powered aircraft was not yet invented. So he was able to navigate the sky and the gift-giving endeavor with just one reindeer.

However, as the population of children got bigger in number, Santa had to carry more gifts every year.

So in the year 1823, Santa added seven more reindeer to the lineup of his flying friends. This brings the total number of Santa’s reindeer to eight.

The names of the eight reindeer are:

This was revealed in a poem called the “A Visit from St. Nicholas or the Twas the Night Before Christmas. It was written by Clement Moore.

This brings up the question about Rudolph, the red-nosed reindeer. Where does he fit into the reindeer lineup?

Well, Rudolph was a later addition to Santa’s reindeer. It was the year 1939, and the weather of the world was getting a lot more polluted than when Santa was first flying.

One particular night, Santa and his pack of eight reindeer had very low visibility due to the fog in the atmosphere.

Making a complete round around the world was looking impossible. It was during this perilous moment that Santa spotted Rudolph’s red nose when he came to deliver his toys.

Santa asked if Rudolph would be willing to be a part of his magical reindeer and light the path as they flew over the world.

Rudolph was more than happy to help Santa, and he led the sleigh through the fog. He returned to the North Pole to a hero’s welcome.

Ever since that night, Rudolph has been a regular part of Santa and his flying reindeer.

It was just as well because Rudolph was an outcast because of his red nose. It made him stand out from the rest of the reindeer.

So to be a part of the reindeer that worked with one of the kindest men in the universe was a privilege for Rudolph.

So Santa now has nine reindeer that help him fly his sleigh.

What about portrayals of more than nine reindeer in the media?

There have been instances in the media that Santa has ten reindeer. The Life and Adventures of Santa Claus, which is a story that surfaced in 1902, mentions the tenth reindeer.

The story by L. Frank Baum was even adapted into a special version for television.

However, it is not consistent with the original versions of Santa and his nine reindeer.