How Old is Santa Claus?

Santa Claus makes a glorious appearance every Christmas, irrespective of the weather. He has never been known to skip the holidays and is always reliable. Come rain or shine, he is always there on December 24th, with his jolly greeting and bringing many gifts to good boys and girls around the world.

But have you ever thought about how old Santa may be? Granted, he looks to be a senior person with all the warmth and benevolence of a distinguished citizen. But he looks the same year after year.

What is it about Santa that he stopped aging after he attained a certain age? Although he seems to be an older person, he always has the energy to make a trip around the world in a single night.

In this post, we tackle this most interesting topic, which is Santa’s age. We also uncover other important aspects of his life, including where he lives and also about Mrs. Claus.

How old is Santa Claus?

The date of Santa’s birth is kept a secret. The main reason is to protect baby Santa from being harmed by time travelers who might have a bad motive and cause harm to him.

However, according to some historians, Santa Claus was born on March 15th in the year 280 AD.

Santa or Saint Nicholas died at the age of 73 after a lifetime of kindness and helping the poor. His death was a requirement to prove that he was worthy of being bestowed with the powers of Father Christmas. But later on, he was resurrected by angelic forces on December 25 in 343 AD.

According to some credible records, it was only after his rebirth that Nicholas acquired his superpowers as Santa Claus. Santa is known to celebrate his rebirth date as well as his original birth date, all the while making sure that all the children receive their gifts on Christmas Eve.

How old is the legend of Santa Claus?

It can be traced back to the 4th-century bishop known as St. Nicholas. He was born in Patara, Lycia, in modern-day turkey. Nicholas was originally of Greek origin and was born during the Roman Empire.

He became the bishop of a small town in Turkey which was called Myra. This bishop was very selfless and full of kindness. He was thought to have inherited a lot of wealth from his family, but he spent everything on helping the sick and the poor.

He often traveled to the countryside to help those who were in need. One of the most popular stories related to Saint Nicholas is the one where he saved three sisters of a family from being sold into slavery because their father had no money to pay for their marriage. Nicholas secretly sent three bags of gold to their home, and the father was able to pay for the girls’ marriage.

Another less popular but miraculous story related to Saint Nicholas also makes him known as the protector of children. Nicholas was traveling one day when he came to rest at an inn. But unknown to others, the owner of the inn had killed three young boys and had put their bodies inside a barrel that was hidden in the basement. The three boys were playing in the fields during the harvest, but they got lost and had come to the inn to ask for help and some food.

It was after seven years that Nicholas came to the same inn. He immediately knew what that the innkeeper had done. He asked the owner to open the barrels and made a sign of the cross as he said, ‘Rise up Children!’ The boys immediately sprang back to life.

Nicholas was a bishop during one of the most severe persecutions in history. Most of the priests were made to renounce Christianity, and those who did not do it were executed. But Nicholas was very firm in his beliefs and also continued to help those who were suffering.

He was imprisoned because of his defiance and his faith. But even in prison, he was known to help other prisoners who were sick and dying. For this reason, Nicholas is also known as the protector of prisoners. His term in prison ended when Emperor Constantine signed the Edict of Milan in 313 AD.

St. Nicholas’ popularity as the protector of the children, prisoners, and sailors continued to spread throughout Europe and eventually, all over the world.

Later on, during the first part of the 19th century, a number of writers and poets wrote and illustrated the fatherly figure who brought gifts for the children. Among these are “The Children’s Friend,” published in 1821 and “A Visit From St. Nicholas,” published in 1822. These two poems played a pivotal role in describing the appearance and physical features of Santa as we know him today.

What are the different names for Santa Claus? 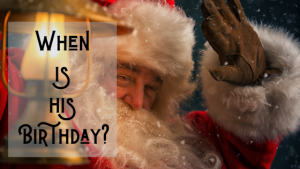 What is Santa Claus’s birthday?

This might seem a bit odd since Santa brings gifts on the 24th and 25th of December. In fact, some people think that Santa’s birthday is in December. But during the holiday season, he simply enjoys bringing toys and other gifts to the good children of the world.

Since Santa lives in a magical world with elves and snow and reindeer, he can celebrate his birthday in the month of March and still have a fantastic birthday. Did you know that Santa celebrates his real birth date as well as his rebirth date? We have discussed more about his magical rebirth earlier in the post. 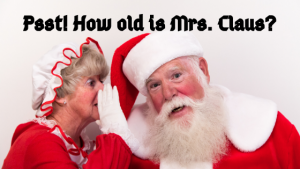 What age is Mrs. Claus?

Even when you mail Santa to ask about Mrs. Claus’ age, he will not tell you right away. Mrs. Claus is very modest about her age, and she is also a firm believer that you never ask a lady her age!

Mrs. Claus spends her days preparing toys with her husband, baking cookies with the elves and also caring for the reindeers at the North Pole.

What is Santa’s real name?

Does Santa have kids?

However, this does not deter him from loving all the good boys and girls of the world. In fact, he loves each of the obedient children as much as he would love his own kids! Santa and Mrs. Claus spend the whole year in Santa’s Workshop making toys because they love the children very dearly.

Where does Santa Claus live?

But of course, no one has the postal address of Santa, so there are a number of places that could qualify as his hometown. Let’s take a look at the three most probable places where Santa might be living.

It is a place in Northern Finland, and many people assume this to be the residence of Santa. The place has all the characteristics of Santa’s home as we know it. Lapland is covered in snow for the most part of the year.

Families and children are welcome to visit Lapland at any time of the year. When you visit the place, you will be greeted by sleighs, reindeers, and sacks of toys. If you are really lucky and you have been on your best behavior, you might even meet Santa himself!

If you visit during Christmas time, you will witness the Northern lights in the sky. You will also get to experience the Christmas meals and activities and the markets that the locals prepare to celebrate the holidays.

Santa’s famous workshop was also discovered to be in Korvatunturi or Ear Fell in Lapland in 1927. This is the workshop where Santa and his elves make all the toys for the children.

It is a town in Norway that is close to the North Sea. Locals from the region believe that Santa was born in Drøbak, and he still lives there.

When you visit this town, you will see the Christmas House where Santa lives as well as the Santa’s Post Office. If you visit during the Christmas time, you might run into the Santa making his rounds in the post office admiring and appreciating all the letters and cards that the children sent him.

The North Pole is the name of a city in Alaska. This place has an official Santa Claus Home, where Santa lives with Mrs. Claus and his elves. When you visit this town during Christmas, you will get to see the reindeer and even Santa. You can take pictures with the red-suited man himself along with the reindeer.

Legend says that Santa’s home is not restricted to one particular place on earth. So although Rovaniemi, in Lapland, has been declared as the official hometown of Santa in 2010, he could live anywhere where it suits him.

Santa maybe a thousand years old, but he is still the most energetic and resourceful person we know from the North. He is the true ambassador of the holiday season and is a harbinger of good news to the young and the old.

We may not know much about his life, but whatever little we know is magical, and that’s what matters. He, along with Mrs. Claus, love all the children very dearly so that your Christmas is a fabulous one year after year.

Since Santa never gives up on us and continues to be kind to us, we can learn a valuable lesson from him and practice being a little more kind to one another, during this holiday season and beyond.