Santa’s Sleigh – The Most Famous Christmas Sleigh of All.

There is no sleigh in the universe that is as famous as Santa’s sleigh. It is also called the Christmas sleigh in some parts of the world. Pulled by his trusty reindeers and flying all over the globe and carrying an endless supply of toys, its presence is as anticipated as the rider himself. Santa’s sleigh is also one of the most advanced and unique vehicles in history.

If Hollywood movies and popular culture depictions are anything to go by, Santa’s sleigh has a rather rusty appearance. But do not be fooled by its antique aesthetics. The mechanic elves in the workshop at the North Pole are definitely as skilled as those in the latest automobile factory.

But do you know how the sleigh works and just how it functions? If you don’t, you have come to the right place. Today we will discuss Santa’s sleigh at length so you will know everything about this classic ride that heralds good news to one and all.

What does Santa’s sleigh (his Christmas Sleigh) run on?

These are fully grown male reindeers with antlers that help in the flying process. They are no ordinary reindeers because we all know that all reindeers don’t fly. But Santa’s reindeers have supernatural powers and are gifted and especially talented.

These reindeers are specially crossed with Pegasus, the mythical flying horse. These resulted in the reindeers having their lungs filled with helium which makes them even lighter than air. The reindeers are also fed with special lichens and magical mushrooms which are only found in the area where Santa lives.

All these features and special diet make the reindeer strong yet light enough to carry the sleigh and make it air-borne.

Because Christmas falls during the cold winter months, there are some nights when the fog is so dense that it slows down the reindeer.  Rudolph’s nose prevents the sleigh and Santa from crashing into obstacles during the night flight.

But Santa’s sleigh was originally powered by a single reindeer, according to the first-ever illustration in 1821. It was published in the poem, Old Santeclaus with Much Delight. During this time, the population of the children was not as numerous as it is today, so a single reindeer could easily power the sleigh.

However, when the population of children kept increasing all over the world, Santa had to deliver more toys every year. And so, just two years later in 1823, Santa added seven more reindeer to drive his sleigh, bringing up to a total of eight reindeer.

This enabled Santa to deliver more gifts to the growing number of children and also make the deliveries a lot faster.

Rudolph the Red Nose reindeer joined the list of the original reindeer as late as 1930, and he often leads the pack of eight reindeer. Rudolph’s red nose serves as a lamp for Santa and his Christmas vehicle when there is too much fog in the night.

The reindeer have fully grown antlers which assist in flying. According to one professor Ian Stewart of Warwick University, these antlers are more than weapons which they use to win their potential mates. These intricate arrangements on their heads are fractal vortex shedding devices that play a primary role in antler-aerodynamics. They create the necessary lift required to fly with the sleigh.

The sleigh has a climbing speed of one ‘T’ or twinkle of an eye and can achieve a maximum speed that is faster than starlight. It has a propulsion of 9 RP or Reindeer Power.

According to a reliable source, the sleigh is also equipped with jetpacks along with the reindeer. Both the jetpacks and reindeer are powered by cold fusion. The principles of cold fusion are still a highly guarded secret by the elves at Santa’s workshop.

Santa uses the reins of the sleigh to direct the reindeer’s head as well as to dictate the orientation of the jetpacks to make every flight very precise. The secret principle of cold fusion also creates a stable reindeer-sleigh system that it can fly high in the sky and not suffer any damage or malfunction.

What color is Santa’s sleigh?

But it is not just an ordinary red. The sleigh is painted with multiple coats of paint to produce a deep luxurious hue. The sleigh also features tufts of fluffy white on the borders of the sleigh. Some renditions of the sleigh are also red in color with gold borders.

However, the color of Santa’s sleigh is sometimes a dark brown with an antiquated look. Irrespective of the color of the sleigh, it is always painted with multiple layers to give it a luxuriant and rich look.

The seat of Santa’s sleigh is made of velour in the same color as the sleigh – brown or red. The seat provides warmth and comfort to the Santa as he sits in it while delivering toys to the good boys and girls all over the world.

Santa is also known to give unique names to his sleigh every year. And the color of the sleigh is also thought to change accordingly. So the sleigh can be just about any color other than red that most folks associate with the Santa on a sleigh and the holiday season in general. 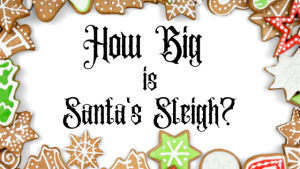 How big is Santa’s sleigh?

Length – 75 cc or 150 lp, where cc stands for candy canes and lp stands for lollipops

When the reindeer are hooked up to the sleigh, the total length of Santa’s sleigh is estimated to be about 60 to 70 feet.

The size of the sleigh is not very big when you consider the number of gifts that Santa delivers during the holiday season. But there is another secret that allows Santa and his reindeer driven sleigh to carry such a large amount of gifts and toys.

He has a magic sack. This sack uses an innovative and state of the art processor called the reversible thermodynamic processor. This is a sort of nano-toymaker that the elves use to create toys and other gifts for obedient children all over the world.

The magic sack also makes toys using components such as carbon-based soot from the chimneys as well as the other locally available materials. This reduces the weight of the toys by a significant degree. 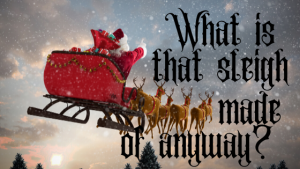 What is Santa’s sleigh made out of?

The seat of the sleigh is made of velour, which is known for its soft and comfortable feel. The fuel used in the sleigh is a combination of hay and oats. The reindeer are powered by carrots.

The runners of the sleigh, as well as the truss, are made of honeycombed titanium alloy which is not only lightweight but extremely strong. It is more than 20 times stronger than any metal known to men.

The truss of the sleigh can also alter its shape and has the ability to morph. This allows it to tuck in and have a more aerodynamic property while in flight mode. It also makes the truss very stable so that it can land on any surface, including pitched and steep roofs.

According to Dr. Larry Silverberg from the North Carolina State University, the sleigh of the Santa is covered in a nanostructured skin which is porous and has a low-pressure system. This skin holds the air flowing through the sleigh onto its body, which reduces the drag by almost 90 percent. When the drag of a vehicle is reduced, it increases its speed by a significant degree and the sleigh is able to fly at high supersonic speeds.

Dr. Silverberg is a mechanical and aerospace engineering professor who had recently completed the visiting-scholar program at the SW-NPL or Santa’s workshop-North Pole Labs, for a period of six months.

The sleigh of Santa is a multi-purpose and versatile vehicle. It is also an all-weather sleigh which is capable of short vertical takeoff as well as landing. The sleigh also has the capacity to travel extremely long distances without refueling.

The sleigh is also equipped with state of the art electronics such as laser sensors. The sensors detect upcoming wind conditions as well as thermal conditions and find the best flight path for the sleigh. As a result of the laser sensors, every flight for Santa is very smooth as well as energy-efficient. In Santa’s workshop, there is ongoing research about whether or not magic is a renewable resource since energy efficiency is of utmost importance in the North Pole as well.

Another interesting feature which makes the sleigh very fast is the relativity clouds. Using this feature, the sleigh allows the Santa sleigh and his reindeer to travel up to 200 million square miles in a single night stopping over more than 80 million homes all over the world.

Relativity clouds can be compared to something like rips in time. These are domains that can be controlled so that Santa can make such a huge number of deliveries that would otherwise take an ordinary person many months to make the deliveries.

All of these features and the pieces of equipment make Santa’s sleigh such a powerful vehicle capable of weathering all conditions so that every good boy and girl enjoy the best Christmas every year.

Of course, Santa also has extensive knowledge of the Theory of Relativity. He understands that light can be bent, time can be stretched and space can be squeezed much like an orange. All of this knowledge also allows him to make such a humungous amount of deliveries by making just a few minutes pass around the globe.

Santa’s sleigh was designed and built by K. Kringle & Elves, Inc. located at Santa’s home base at the North Pole.

The magic of Christmas is not complete without Santa on a sleigh and his reindeer friends. The sleigh has undergone a lot of modifications and upgrades through the years, making it a vehicle that is versatile, efficient and extremely indispensable to Santa and the millions of children all over the world.

The sleigh combines a fine blend of technology and practicality and delivers way more than it looks. Santa is the epitome of goodness and joy during the holidays, but he won’t be able to accomplish half as much without his sleigh.

May Santa and his sleigh full of gifts land on your roof this holiday season and bring a very Merry Christmas to you.

The 10th Reindeer from Jokes