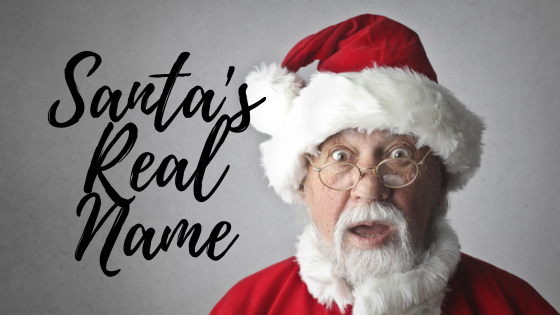 What is Santa Claus Real Name?

The jolly red cheeks and white-bearded man synonymous with Christmas is known to many people as Santa Claus.

In other parts of the world, he is also known by a host of other names.

But is Santa the real name of this gift-bearing distinguished senior? Have you ever wondered what his real name might be?

Well, Santa indeed has a name. Keep on reading and find out!

Santa Claus’s name comes from Saint Nicholas or St. Nicholas. Nicholas was born in what is now modern Turkey.

He was born on December 6, in the year 343. Santa’s full name is St. Nicholas of Myrna.

He was a bishop who was orphaned at a young age. His parents are believed to be of Greek ancestry.

They left him a good amount of inheritance when they died. But instead of using this newfound wealth to make a comfortable living for himself, Nicholas used it to help the poor and the needy in the city where he lives.

Among the many goods and benevolent things that Nicholas did in his lifetime are two notable instants:

· He saved three sisters from being sold off into a life of slavery. Their father was too poor to pay for their marriage, and the sisters were facing a precarious situation.

When Nicholas heard of their predicament, he left three bags of gold into their stockings. The sisters were saved from the miserable life that they were destined to for.

· On another occasion, he also saved three boys who were falsely imprisoned and were facing execution.

How St Nicholas came to be called Santa Claus

If you’re wondering how St. Nicholas came to be known as Santa Claus, your query is legit.

St Nicholas was born in Turkey. But his kindness and charitable works continued to be known all around the world.

He also came to be known as the patron of sailors and children equally.

During the protestant reformation, the practice of honoring saints quickly died away.

But everyone loved Nicholas, and he continued to be popular, particularly in Holland. They continued to celebrate St. Nicholas day.

The Dutch’s nickname for St. Nicholas was Sinterklaas. When the first Dutch people migrated to the American continent, they took the tradition of celebrating Sinterklaas day on December 6 with them.

Around the same time, there were a couple of happenings taking place regarding this jolly person and his gifts in America.

In particular, the poem, An Account of a Visit from Saint Nicholas, written by Clement Moore in 1820 and an illustration by cartoonist Thomas Nast transformed the Americans’ view of the gift-bearing man and his flying reindeer.

The seamless amalgamation of the Dutch’s traditions and these incidents in America resulted in St. Nicholas’s name becoming Santa Claus.

Ever since, he is known as Santa Claus in many parts of the world, including the Netherlands and America.

Other names of Santa Claus

The origin of the Santa Claus name is an inspiring one. However, he is also known by different names in different parts of the world. They include.

· Saint Nicholas, Saint Nick or Santa in most parts of America

· Kris Kringle or Christkind in Germany and Switzerland

· Jultomten or Christmas Brownie in Sweden

· Hoteiosho or the god who brings many gifts in Japan

· Pelznickel in parts of Pennsylvania

· Mikulas or St. Nicholas in Hungary

· Weihnachtsmann or Christmas man in Germany

· Père Noël in France and Belgium

· Kerstman, Sint Nikolaas or Sinterklaas in the Netherlands

Interestingly, there are different stories behind the different names used by people in different parts of the world.

But there is a common theme behind the stories. It involves a person who has a senior citizen’s appearance who brings a lot of gifts to children, especially if they have been good.

He is also synonymous with doing a lot of good and helping the poor people during their hardships.