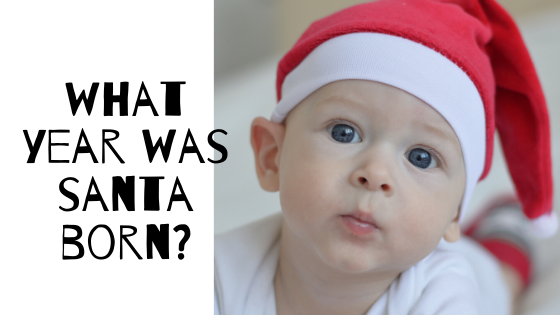 What Year Was Santa Claus Born?

Santa is a regular figure during the holidays. Come sunshine or snow, Santa never skips a season of Christmas. Can you imagine what Christmas will be like without Santa’s presence? I can’t!

The bearded man from the North always graces us with his presence. But don’t you agree with me in saying that he has looked the same every year? For decades he doesn’t seem to age or wither in his homely appearance. This does make you wonder when Santa was born.

The year that Santa was born

According to a number of credible resources, including the National Geographic, Santa was born in the year 280 AD, which is in the third century. His birthplace was in a village called Patara, which is near Myra. It was once a part of Greece, but it is now in modern Turkey.

His parents were supposed to be from Greece, who were of noble descent. However, his parents died when he was a young boy due to an epidemic. Because his parents were quite wealthy, Nicholas was left a considerable amount of inheritance by his parents at the time of their deaths.

In stark contrast to popular belief, the exact date of Santa’s birthday is believed to be March 15.

This might give rise to a question, why does Santa bring gifts to children on Christmas Eve if it’s not his birthday?

The tradition of honoring Saint Nicholas and his gift-giving continued to be observed on December 6 throughout Europe. This day is regarded as the day that Saint Nicholas passed away in 343 AD. Children all over Europe were given gifts in remembrance of the Bishop, who loved to give gifts.

However, during the Reformation, people were getting uneasy about the veneration of saints in general. It was during this time that the day of giving gifts to children was pushed to the 24th and 25th of December. This is the explanation as to why Santa brings gifts to good children on Christmas Eve of every year.

Life of Nicholas after the death of his parents

Nicholas joined a monastery in Myra after his parents passed away. He was made a bishop when he was quite young.

Nicholas used the money that his parents left him to do a lot of good. He was actively seeking out the poor and the needy in and around the town where he lived. He is known to rescue several people from being condemned to a life of misery and even death. He is known as the protector of orphaned children to prisoners as well as sailors.

He lived during the Great Persecution in 303 AD. It was a time of extreme hardship for Christians all over the world. Nicholas also faced imprisonment during this time. But even in prison, he was known to help the sick prisoners. After his release from prison, he gradually became known as Saint Nicholas.

During and after the persecution, many people were beginning to stop revering the saints. But everywhere, people could not forget the kind deeds of Saint Nicholas. His popularity began to grow as the gift giver and the protector of children.

How old is Santa Claus?

Talking about the year of someone’s birth will naturally steer the conversation about how old he or she is. If Santa was born in 280 AD, how old is he now?

But if you take into consideration the rebirth of Santa Claus, he is 1,676 years old. A rebirth? What does this mean?

Saint Nicholas, the Bishop, passed away on December 6, 343 AD. He was 73 years old. He had lived a life full of kindness and caring for the poor.

Many are of the opinion that his death was part of the requirement for him to become the Father of Christmas. So he was resurrected in the same year on December 25 by angelic forces. After this miraculous event, he was deemed worthy of being Santa Claus with all the powers.

Regardless of his incredible story of rebirth, Santa Claus is known to celebrate both his actual birthday as well as his re-birthday.