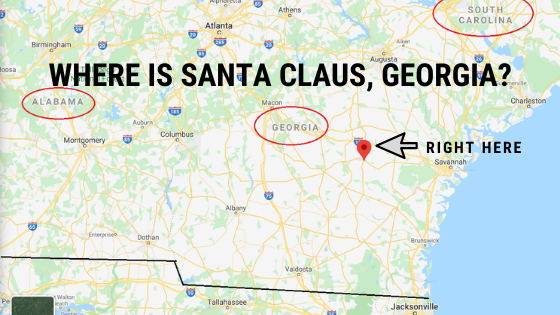 Where is Santa Claus, Georgia?

Santa Claus is the name of a city in the State of Georgia in the United States. It falls under Toombs County.

In keeping with the traditions of its unusual name of a place, the city is a favorite among tourists, especially during holidays.

The place is also known for its streets named after Christmas themes, as well as the famous Santa mailbox.

Find out everything about this fascinating city and what places you can enjoy if you decide to visit this fantastic place.

How the city got its name

The history behind the naming of this city’s name is very interesting. Back in the 1930s, a local farmer had big dreams of selling pecans.

He had set up a stand to sell the nuts he had harvested from his fields.

But when he set up the stand, there was no one stopping by to buy the pecans! He was less than impressed with the travelers.

You see, the town is sandwiched between Savannah and Macon. Cars and their drivers would often pass the streets of the town to get to the other cities.

Apart from its somewhat unfavorable location, the city had no restaurants or other tourist attractions. It is still the same way today, to a large extent.

The name of the farmer was C.G. Greene. Tired of people ignoring his pecan stand, he decided to name the place Santa Claus.

He thought that it would pique the interest of people and also make them happy as well.

He was considered to be a jolly good person with a good heart, much like Santa. In fact, people in his community used to call him Santa Claus!

Greene went on to spearhead a movement to become the city’s first mayor and also officially recognize the town’s name like Santa Claus.

His dreams were fulfilled when a member of the Georgia House of Representatives, Thomas F.Fuller, helped the city’s name to be officially registered as Santa Claus.

And no surprise, Greene served as the first mayor of Santa Claus.

The town of Santa Claus is a much-loved destination for a lot of tourists during the holidays.

So if you ever decide to visit this small enchanting place, you will love visiting the following places.

Although, the town is rather small so you can’t actually miss out on anything I have listed below.

Highlights about the city of Santa Claus, Georgia

The city of Santa Claus may be small in size, but it is second to none.

Some of the most interesting facts and highlights about this city include:

So if you are ever in the area, be sure to stop by for a visit. Maybe even pick up a pecan or two.