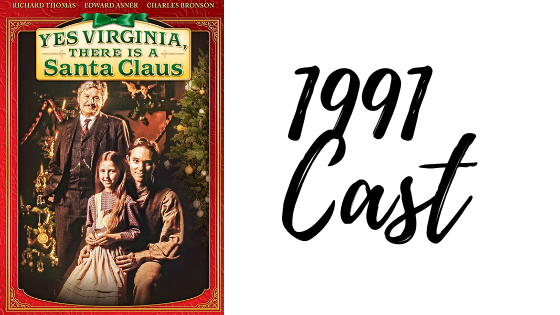 Yes, Virginia, There is a Santa Claus Movie 1991 Movie Cast

Named after the most iconic newspaper print in the world, Yes Virginia, There is a Santa Claus is a holiday movie about a young girl named Virginia O’Hanlan.

The original newsprint was published on September 21, 1897. The movie was released on December 8, 1991, almost a century after its publication, with a rating of 86% on Rotten Tomatoes.

What makes this movie special is due to a couple of reasons. One, it is a classic yuletide movie that can be enjoyed by the entire family. Second, it is based on a true story.

Although the made-for-TV movie features a highly fictionalized account, it is nonetheless a great movie that remains a favourite.

In this post, we take a look at the cast members of this memorable movie.

The cast of Yes Virginia, There is a Santa Claus.

Born on June 13, 1951, Richard Thomas starred in the movie as James O’Hanlan. He plays the role of Virginia O’Hanlan’s father, an unemployed Irish immigrant. He is desperately looking for a job but lands in fistfights more often than he gets a job.

Thomas is best known for his role in the CBS drama The Waltons. He is also the recipient of an Emmy Award for the same role.

He stars as Francis Church, one of the editors of The Sun. He is credited to have answered the little girl’s query about the existence of Santa Claus. Francis Church was the one who wrote the now famous editorial.

Bronson was one of the most popular actors in the 70s. Some of his best movies are Machine-Gun Kelly and Never So few. Bronson died on August 30, 2003.

Edward Asner is one of the most well-known television actors. He was born on November 15, 1929. He stars as Francis Church’s boss, Edward P.Mitchell, in the movie, Yes Virginia, There is a Santa Claus

He has won multiple Emmy Awards and is a well-known face due to his role as Lou Grant on a show with the same name as well as The Mary Tyler Moore Show. He is also credited as Ed Asner in the entertainment industry.

Born on November 2, 1891, Katharine Isabelle stars as Virginia O’Hanlan. Virginia is the eight-year-old girl who writes the letter to the editor of a newspaper and inspired the iconic editorial. In the movie, she is credited as Katharine Isobelle.

Katharine is known as a scream queen for her numerous roles in horror movies. Her most notable character to date is Ginger Fitzgerald in the trilogy of the same name.

He is an Italian actor and a director born on March 28, 1951. In this movie, he stars as Donelli, the best friend of James O’Hanlan. Like James, he is also an unemployed Irish migrant looking for a job. But they often land in trouble with others.

Kelsey is an actress of Canadian origin. She stars as Evie O’Hanlan, the wife of James and mother to Virginia and two other children. Kelsey’s most notable works include Stargate SG-1 and Needful things.

She plays Andrea Borland, one of the very few female reporters at the Sun. Colleen is best known for her work in The X-Files.

He plays the role of one of O’Hanlan’s children, Sean.

He stars as Chambers, a supervisor on the docks where James and Donelli worked.

She is an actress of Canadian origin. She plays the role of Mrs. Goldstein, a kind neighbor of the O’Hanlan’s. Carlson passed away on November 1, 2011, at the age of 84.

He plays the role of Teddy O’Hanlan, who runs errands in the office of the Sun. He aspires to be a great writer, much like Mr. Francis. His notable works include Grave Encounters and Next Avengers: Heroes of Tomorrow.

She is an actress who has roots from Uruguay. In the movie, she plays the role of Maria, one of Donelli’s daughters.

She plays the role of Celeste, Maria’s sister. Some of Kerry’s notable works in television include The Killing and The Good Doctor.